The Bluegrass Music Association of Maine mourns the passing of Al Hawkes on December 28, 2018 and his wife, Barbara Hawkes, who passed away on December 3, 2018.  Al and Barbara were instrumental in the formation of BMAM, holding the initial Steering Committee meetings in their home.  Always sharing their talents and enthusiasm to all who knew them, Al and Barbara will continue to live in our hearts and minds. 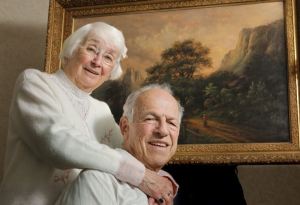 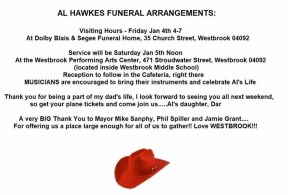 He grew up in Westbrook and attended Westbrook schools. He grew up just up the street from his childhood friend Barbara Keene, who would become his wife of 66 years.

After he graduated from Deering High School he enlisted in the Air National Guard; during the Korean War and his unit was activated and sent to Tripoli, Libya, No. Africa. After his discharge from the Air Force, Al attended college in Boston at Massachusetts Radio School to study radio.

After college he married Barbara in 1952. They settled in Westbrook to raise their two children and started Hawkes TV Sales & Service, Event Recording, and eventually The Sound Cellar. Al’s passion in life was his music, whether it was recording someone else performing, or performing himself on his 6 or 12 string guitars or mandolin. He traveled around the United States performing country and bluegrass music. He received many awards for his music both in Maine and nationally. He was the CEO of Event Records and Darleen Music Publishing Company.

Al was predeceased, by only a few weeks, by his partner and beloved wife Barbara Hawkes; and by his son Franklin Hawkes.

He is survived by his daughter Darleen “Dar” Doughty and her husband John of Windham; his grandson Matthew Boullie and his wife Melissa; his great-grandson Damian Boullie, and his great granddaughters Autumn, Makayla, Isabelle, and Hailey Boullie.

Family and friends are invited to attend a time of visitation on Friday, Jan. 4, 2019. from 4-7 p.m. at the Westbrook Chapel of Dolby, Blais & Segee, 35 Church St. A funeral service will be held on Saturday, Jan. 5, 2019, at 12 p.m., at the Westbrook Performing Arts Center, 471 Stroudwater St., Westbrook. A reception will follow in the cafeteria. Musicians are encouraged to bring their instruments and celebrate Al’s life. Thank you for being a part of my dad’s life. I look forward to seeing you all next weekend, so get your plane tickets and come join us.

Al and Barbara will be buried in the Spring at Highland Lake Cemetery in Westbrook.

In lieu of flowers,   donations may be made in Al’s memory to support aspiring young musicians to: