In Memoriam- James Chard, Past BMAM President and Board Member 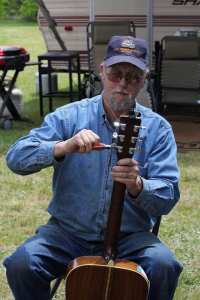 The Bluegrass Music Association of Maine mourns the passing of another former Board Member and President (1997-2000), Jim Chard on January 15, 2019. Jim was an accomplished musician and songwriter who won many awards for each. He performed in the band, Windy Ridge, with BMAM’s current President, Beth Revels.

Jim was a veteran, serving in Vietnam, and many of the songs he wrote were influenced by that experience. He also wrote songs that expressed his deep sense of humor such as “The Ballad of Grandpa and the Turkeys” that won the National Comedy Song of the Year in 2014.

Jim will be missed by the Bluegrass community who will remember his many performances at bluegrass festivals, at picking parties, and in intimate circles of friends and family. He shared so much of himself with us. Our deepest condolences to Julie, Jim’s wife, and her family.
The link to his obituary follows:  https://www.brackettfuneralhome.com/obituaries/James-Chard/