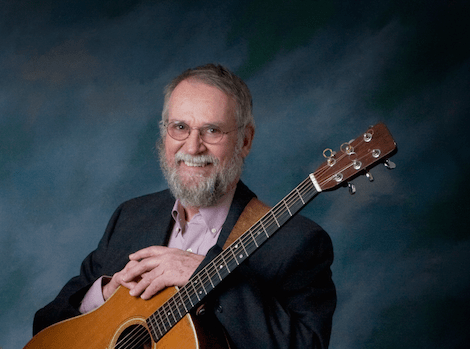 We are happy and proud to announce that a member of the Bluegrass Music Association of Maine will be inducted into the Maine Country Music Hall of Fame. Congratulations to Stan Keach for his well-deserved recognition!

Stan serves on the BMAM Board of Directors and is the Editor of our quarterly newsletter the Bluegrass express. Stan’s induction ceremony into the MCMHOF will be held in Mechanic Falls at the Silver Spur on May 19, 2019. Please consider joining Stan and Liz Keach with their family and friends as they celebrate this deserving day of recognition.

Stan is a great musician, singer, accomplished songwriter, artist, and longtime bandleader of The Sandy River Ramblers which includes Stan Keach (Guitar), Julie Davenport (Upright Bass),Dan Simons (Mandolin), Bud Godsoe (Banjo), Finn Woodruff (Fiddle . . . usually), Dana Reynolds (Percussion). Stan received honors at the 7th Annual Songwriting Contest of the Maine Songwriters Association chosen from among 33 entries for the 2017 honors, and after all the singing and the judging, Stan Keach took first prize for his song, “On Boot Hill”, written with Rick Lang. Nationally touring Ralph Stanley II & The Clinch Mountain Boys recorded the song, check out the video with Stan’s original artwork, as you can see he has many talents including being an accomplished illustrator.

Stan Keach is a nationally-known bluegrass songwriter whose songs have been recorded by such artists as Audie Blaylock, Ralph Stanley II and Special Consensus. His song, Whispering Water, landing in the National Top Ten Bluegrass chart.

Together in a collaboration of the Sandy River Ramblers and the Maranacook String Band (a youth band started by Keach based out of Maranacook Community High School in Readfield, Maine), Stan recorded the popular CD “Cry of the Loon & Other Original Songs About Maine”. Packed with original songs about Maine, with two of the songs co-written with multi-talented wife Liz, the album is a real crowd pleaser. His songs, depicting Maine in all aspects, are poignant, humorous and even historical in nature. The 2010 release of his “Bear in the Barn” CD with the Maranacook String Band also features Stan’s original songs.

Stan can often be seen playing out with his duo Stan & Dan, with Dan Simons sensational Mandolin player (a Maranacook High School alumni). Besides the duo, the Sandy River Ramblers and the Maranacook String Band, you can also catch Stan collaborating on stage with Finn Woodruff, Bobby St. Pierre, and other talented Maine musicians.

Also being inducted in the MCMHOF on May 19th is Stan (Jr) Anderson who is very well known in the country music circles. The Induction committee sifted through many nominees and, based on the point system, submitted the top 3 scorers to the living members of the MCMHOF who made the final vote.

Dinner, induction ceremony &amp; show – $25. Reservations must be made for dinner. Three entrees to choose from.

No reservations after May 11. Phone number for reservation – 207 795 1119. Induction ceremony and show only – $10. While you are there you can take a tour of the famous Maine Country Music Hall of Fame Museum on the lower level – a must see for anyone interested in country and bluegrass music in Maine!