The elections results are in!    You, the members of the Bluegrass Music Association of Maine (BMAM), have elected the following:

Board of Directors (2 year term)

An Introductory Message From Your New BMAM President – 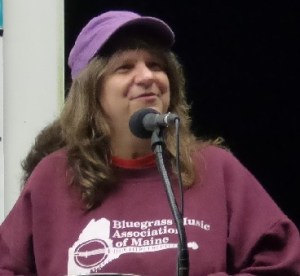 CONGRATULATIONS to our incoming Board Members!!  The returning Board of Directors with one year left on their term are: Matt Baker, Patricia Thompson and Bob Bergesch.  BMAM Board Meetings are held once a month at the Kennebec Valley Community College in Fairfield, Maine on the Second Wednesday of each month at 6pm. General Members are invited to attend at any time. The Board of Directors is an integral part of keeping this organization alive and running, and we have a great crew of dedicated individuals ready to go forward this year!

Thanks to outgoing President Bill Umbel for his last two years serving as President.  The office of Vice President is a position appointed by the Board and Bill has expressed interest in serving in that capacity.  BMAM would like to send many thanks to Steve Williams who is stepping down as Secretary. I am pleased to announce that Nellie Kennedy will be taking on the responsibilities as our new Secretary.

Twenty Plus Years with BMAM

Wow, President. I am honored. Almost twenty-five years ago, I heard Al Hawkes on WMPG’s Blue Country (hosted by Blizzard Bob Wade) announce that there was a group forming a new organization having to do with Bluegrass Music.  I made the call to Al, who I had not met up to that point, and told him that I would like to be involved.  Before long I had become part of the Steering Committee that would eventually form BMAM.  There I met all kinds of folks that have been involved with Bluegrass in Maine on many different levels, some for many years, and others with varying degrees of experience in Bluegrass but all with great affection for the genre.   I was a newcomer to Maine Bluegrass, settling in Maine after having been stationed to Brunswick Naval Air Station in the ‘80s serving as a Navy Electronic Technician and Honor Guard Bugler.  While working with Blizzard Bob I found out about the bluegrass festivals that existed in Maine at that time.  Festivals such as Oxford County Bluegrass, Blistered Fingers and Thomas Point Beach were my introduction to the great and long heritage of Bluegrass in Maine.

The Steering Committee had soon chartered the Bluegrass Music Association of Maine, and I ended up on the very first Board of Directors in its founding year.  The election and first several years of jams were held at The Roost in Buxton, Maine.  It was there I would meet my longtime bandmate, Jim Chard who was also on the first Board, and I have been playing and performing with him in the Windy Ridge Band for 23 years now. 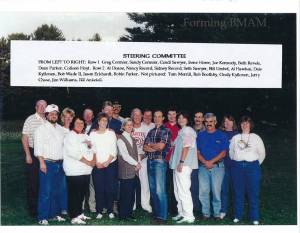 Throughout the years I have served BMAM in several different positions. I have been BMAM Secretary, Newsletter Editor, Board Member and even Chairman of the Board.  In the past I’ve spent countless hours setting up jams, coordinating and setting up the BMAM Booth at several festivals and I’m currently spearheading the Bluegrass Music Association of Maine Facebook page. And I can’t express how much fun and gratification has come from spending time with folks who love, listen and play bluegrass music.

Like many of you, bluegrass music, and all that surrounds it, is a large part of my existence.  Whether it’s playing tunes around a campfire ‘til well past midnight, being in the audience at an outdoor Maine festival (with happy extremes of scorching sun and chilly nights), or being at little venues throughout the state watching and listening to some of the best bluegrass anywhere, my life has been enriched by my involvement in bluegrass and this organization in particular.   The amount of great folks that I have met through this organization is not lost on me.  I have been very lucky to play with many of you at jams, and have seen many BMAM members meet and become friends through these gatherings.

Although I didn’t grow up with bluegrass, I have been playing guitar from the age of eleven.  At twelve years of age, I was playing, singing and even performing a song I had written solo in my hometown church.  My youth was spent playing and singing everywhere and anywhere I could, and having fun doing so.  While in the Navy, I performed with the Navy Choir and played out locally at places where I was stationed. A musical highlight was having a song I wrote and recorded get regular air play on the radio in Newfoundland and also did a solo one-time half hour show on cable out of St. Johns.   When I’m not immersed in bluegrass, I play Irish music with the band Bitter Brew performing regularly at Byrnes Irish Pub in Bath and Black & Tan in Augusta.  In the early ‘80s, I dove headfirst into bluegrass studying from my bluegrass cassettes, learning as many songs as I could.  Every jam was so exciting, and every song I played just led me to wanting to learn more.

Ten years ago,  I began broadcasting on Bowdoin College Radio.  I had previously cut my teeth on Armed Forces Radio and was excited about bringing a bluegrass show to the midcoast of Maine calling it “Mama’s Midcoast Bluegrass” (mama, a moniker I was called even before I had kids).  My show is currently on WBOR 91.1 FM on Mondays from noon to 2pm (eastern) and can be heard worldwide at wbor.org.  It features local recordings, live music when possible, and a variety of new & old, traditional to progressive as well as Maine & national bands.  While constantly looking for music for this show, I have come to appreciate bluegrass music in its entirety.

My bluegrass band, Windy Ridge, has played around Maine and beyond, at festivals, coffee houses, a rodeo downeast and more, we even opened a private event featuring Claire Lynch.  Windy Ridge has been honored with winning first place Gold Medals at the National Veterans Creative Arts Festival (a contest open` to US veterans) including two first place national wins this year with “Railroad Line” and “Trucker and the UFO”.  Playing in a bluegrass band has afforded so many opportunities for me. I have enjoyed playing in so many awesome places and meeting so many great folks.

BMAM’s Mission and Future
I truly believe that the Bluegrass Music Association of Maine serves a noble purpose.  Prior to its existence, if you were new to bluegrass, or even just new in the state and didn’t know anyone, you may not have been invited to people’s homes to jam with them.  Other than summer festivals, it could sometimes be difficult to find a place or folks to play with.  BMAM’s first Southern Jam, held in the festival “off-season” was the beginning of an opportunity to join in a bluegrass jam without previously having to know anyone.  With monthly jams, presently at the North Yarmouth Academy Music Room in downtown Yarmouth and at the Grange in Brewer, pickers are continuing to find a place to play, meeting friends new and old. BMAM strives to be welcoming to the newest bluegrass fan, as well as the seasoned veteran of bluegrass.

It is because of the dedication of many volunteers that the jams continue and grow. The association would love to do more with workshops, jam at locations like the WWF Railway Museum, pursue education of bluegrass music in schools, provide possible stipends to string instrument learners going to music camps and much more.  These grand ideas are dependent on more participation of Members. A new fundraising committee has been started this year, you are encouraged to be part of it.  Our Members have been assisting in the Kids Academy at Blistered Fingers, and more volunteers are needed to continue this and other activities, expanding bluegrass to our young generation. Your suggestions and participation in BMAM are always welcome and greatly appreciated.  All Officer’s emails are listed on the mainebluegrass.org webpage under Association Information>BMAM Leadership.

We are a certified Maine 501C3 nonprofit organization, essentially staying vital through the devotion of time and support from good folks like you.  Through a membership, Solo(individual) or Duet(couple), you are supporting these efforts.  Memberships are available for purchase at the BMAM Jams, where the BMAM Booth is set up, or by printing out application and sending it to the BMAM P.O. Box.

The BMAM Board is making strides in developing an online presence, and hope to be able to offer dues payment online through PayPal in the near future. Other ideas for the website that have been kicked around at the Board Meetings include starting a classified page, regularly updating the active Maine Band Listing, and pointing attention to the historical archives already online (pictures and descriptions of bluegrass memorabilia collected over 20 years by BMAM historian Joe Kennedy and photographed by Darwin Davidson).

The webpage (easy to remember – – mainebluegrass.org) has a Bluegrass Calendar which depends on inputs from Maine Bluegrass Bands and local venues that feature Maine Bluegrass. Whether it’s a free town outdoor gazebo concert, a public invited jam, a festival or an intimate concert at a Maine theater, restaurant or pub, we want to list Maine Bluegrass happenings.  If you do not see your bluegrass event on the calendar, please use the online dropdown menu Who’s Picking Where and submit your event. We hope this will be the go-to site for Maine Bluegrass Event listings.  If you have a show, we want to get folks there!

Thank you so much for voting me in as your new President.  I hope to keep folks informed about BMAM and Maine bluegrass activities through this webpage and THIS NEWS BLOG. To have this news sent to your email, go to the NEWS page at mainebluegrass.org, scroll all the way to the bottom and enter your email in the box.  We already have over one thousand subscribers!!

Looking forward to a great year with BMAM !!