Al Hawkes and his Bluegrass Nitehawks 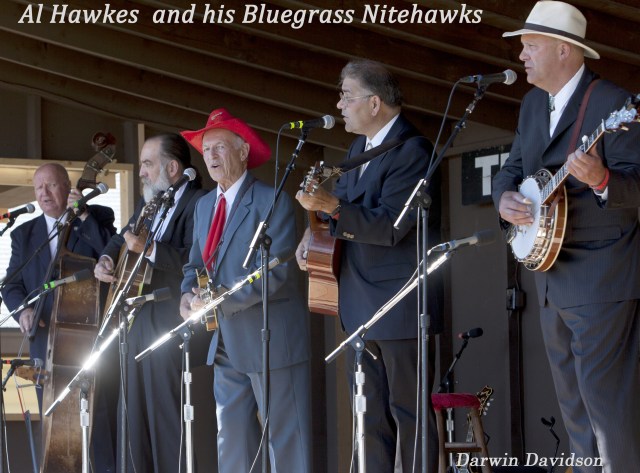 Al Hawkes has been called “… truly a Maine and National Treasure..” and “… A New England Institution…” Al has over 30 awards in Old-Time Country and Bluegrass Music and is recognized as on of the pioneers of Bluegrass by the International Bluegrass Music Museum in Owensboro, Kentucky.

Al Doane has been Al Hawkes’ upright acoustic bass player for over two decades. He was inducted into the Maine Country Music Hall of Fame in 2009. Al got his music start as a teenager playing guitar in the famous New England Band, The Katahdin Mountaineers. Al Doane attended Berklee School of Music in Boston. He also plays guitar, sings lead vocal, and contributes vocal harmonies.

Bruce Millard brings a unique and innovative guitar sound to the “Nitehawks”. Along with being a competent flat-picker, he can also tear up the strings with his “Travis” finger-picking style. Bruce has spet over three decades honing his musical abilities playing Country, Folk, and Dance Band music. He always delights his audiences with his charsmatic personality and smile. Brucce is a graduate of the University of Maine music program.

Jack Jolie has played guitar since he was eight years old. He lived in Music Row in Nashville in the mid-seventies writing and recording Country Music. He spent twilve years in the Grass Routes Bluegrass Band and helped to produce two Bluegrass CDs. Jack contributes a strong driving rhythm and lead guitar work and an extensive vocal reprertoire to the “Nighthawks”.

Mike Reynolds adds his hard driving Bluegrass banjo sound with the many styles he has absorbed from Earl Scruggs, Don Reno, Don Stover, just to anme a few. He has performed throughout New Englad with Bands including: Plain Dealing, The Back Porch String Band, and New Found Grass. With his unique banjo style, vocals, and harmonies, he adds the final touch.